Supporting the transition from counting to part–whole strategies

Editor’s note: This is an updated version of a blog post originally published on September 21st, 2020.

As learners move from KS1 to KS2, some may still rely on counting strategies. By supporting learners’ understanding of part–whole strategies, we can make their transition to KS2 maths smoother and more enjoyable.

If we were to go into a KS2 classroom and ask the question 8 + 5, we may see four things:

As a very loose assessment, we can put these learners into three groups:

It is this third group we need to support, to ensure they do well and enjoy their KS2 maths.

How can we support KS2 learners who rely on counting strategies?

If children continue to rely on only a counting strategy, it will become increasingly difficult to attend to new ideas, as they’ll be working so hard just to complete basic calculations.

We can see how this could be useful in this problem.

However, a child who doesn’t have the same number sense or understanding that 301 can be broken into smaller parts, only sees 301 as 301. Their options are limited and they’re likely to have to use a written method (such as a column method) to complete the problem.

Written methods can also disguise the fact the learner doesn’t have an alternative strategy. If we think of column addition and subtraction, we’re generally making one-digit calculations. In other words, easily countable calculations.

Since it doesn’t take long to assess if a child is reliant on counting strategies, we need to know the best way to support their understanding of part–whole strategies.

This visual representation of a number allows the child to ‘see’ a number. There are many children who are good at maths phonics — they see the symbol 5 and make the right sound, “five.” They may also know that five is placed between 4 and 6. However, if you ask them to show 5 using materials, they may be very confused.

A good assessment is to ask a child to show you 5 in as many ways as they can. If they produce something like the representation above, we can be quite sure they understand 5. Children who struggle with an exercise like this can benefit greatly from using five and ten frames.

In primary school, we work largely in a Base 10 number system, so understanding ten is very important.

The first step to understanding 10 is to get a good understanding of five, using a five frame. We can use the MNP Visualiser app to help us out with this.

Alongside understanding five, we want learners to be able to identify numbers within five. Double-sided counters are a simple and effective tool to achieve this. Putting down counters and covering them encourages learners to see other numbers in the numbers. Questions that accompany this activity include:

Once a student has a good understanding of five, we can progress to 10.

Again, using a ten frame as a visual representation of 10 is highly effective. A similar activity with double-sided counters, like we used above, can be expanded upon. The questions may change slightly, but we can continue to use Visualiser and encourage learners who need this support to work in pairs challenging each other.

We want learners to become fluent with this activity and be able to recognise numbers to 10, including their component parts.

Once this has been established then we look to using 10 when joining sets.

These activities focus on understanding numbers and the importance of 10. Learners — particularly older learners — will need a lot of practice to reinforce this. Teachers will also need to be ready to introduce questions that highlight the importance of 10. Questions like 199 + 201 can be asked and followed up with:

What do you notice about the numbers?
Can you see any numbers that make ten?
What do you think would happen if you moved one number to another?

This can be supported by using the Base 10 blocks activity in the MNP Visualiser app.

Learners can use iPads, physical ten frames or Base 10 blocks, but they can also use partially filled ten frame cards as flash cards, using the same series of questions as in the video above.

This is an easy homework activity too as long as it is understood that less is more. They are designed to be repetitive in nature but even the most enthusiastic mathematician would find an hour of ten frame flash cards a touch too much.

Learners greatly benefit from having part–whole strategies among the approaches they can call on. Part–whole strategies also help them develop their number sense, which supports their learning in all areas of maths. As teachers, we need to keep our assessment sharp, but thankfully, assessment for counting and part–whole approaches is relatively straightforward and allows us to provide targeted support.

With time, patience and a willingness from learners to practice, this transition from counting to part–whole strategies can make a fundamental difference to their learning.

Visualiser is an all-in-one teaching tool for iPad that helps you create, save and share your own maths mastery lessons. 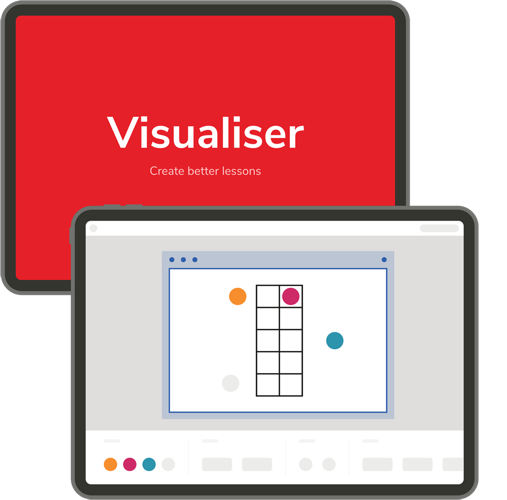 Adam is currently subject specialist and series editor at and co-host of the School of School podcast. He is a former primary school headteacher and the first primary mathematics specialist leader of education in the UK. He was the strategic primary lead for the Maths Hub pilot programme at the NCETM, where he was also involved in the Textbook and Diagnostic Assessment programmes. Adam has worked closely with the NW1 Maths Hub as well as Manchester University, numerous local authorities and teaching school alliances.