Blog > Teaching Maths for Mastery > How can you use statistics to make sense of the game of cricket?

How can you use statistics to make sense of the game of cricket? 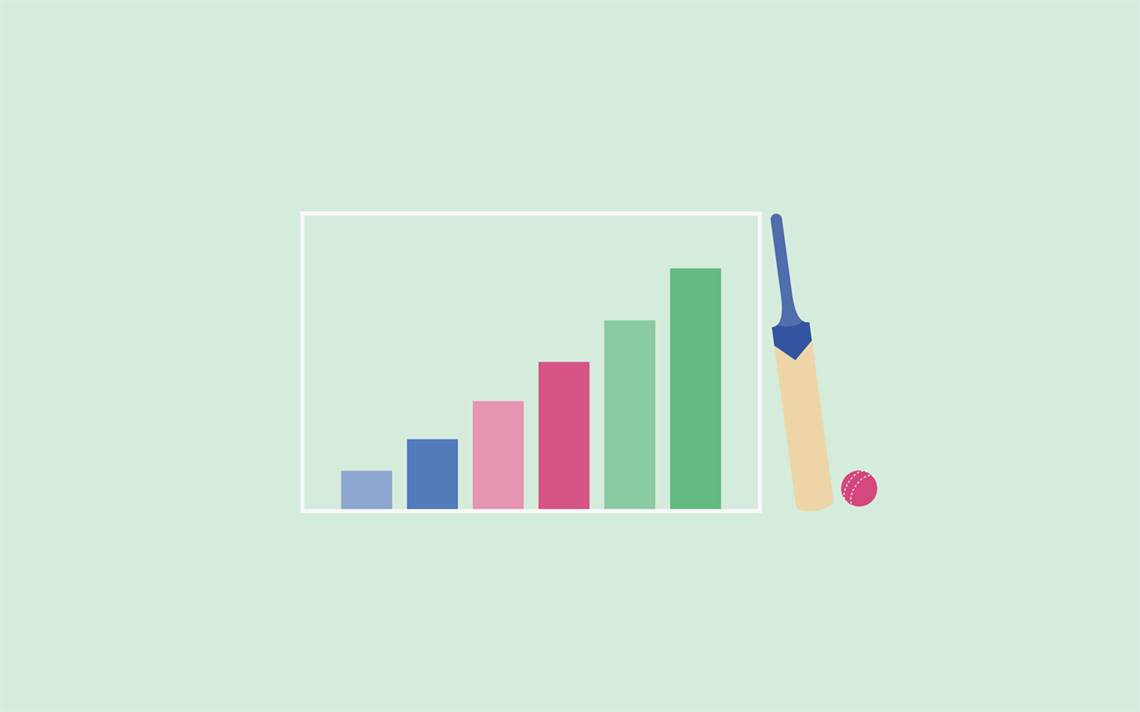 I think cricket is a great companion when working from home. Statistics are littered throughout the commentary — which could be confusing in some contexts, but are surprisingly helpful in cricket.

The commonly-cited statistics allow me to predict what’s going to happen, they let me know when something truly special has happened that I would otherwise be unaware of, and they help to build a deeper appreciation of the game by connecting the present to the events of the past.

How can statistics help make sense of the world?

Firstly, statistics take data collected from real-world events, and provide a framework to analyse and present this data in a way that other people can draw conclusions from.

So how can we use statistics to make sense of the game of cricket. Let’s see…

How can you use statistics to make sense of cricket?

Cricket, is a game believed to have originated in south-east England sometime in the 16th century. Since then, it’s been loved by sports fans the world over for the competition and sportsmanship. But, this isn’t the only reason people love the game. Statisticians love the vast amount of data generated as the game is played (statisticians are a different breed).

So how can we make use of all data to deepen our appreciation of the sport? Let’s start by looking at the history of the English national team to see how well they’ve done in the past.

From 1877 to 2020 England has played 1024 matches as the national team. In that time they have won 372 times and lost 305 times. Is that good? Thankfully statistics come to the rescue to help us in that decision.

A quick bit of maths tells us that the percentage of games England has won is 36.32%. On the other hand, Pakistan has a winning percentage of 32.24%. So England is better then?

I know what you are thinking, it’s not fair to compare Pakistan’s winning record against England’s, England have had 75 years more practice. Fair enough, let’s turn back to the stats to see if we can make a ‘more fair’ comparison.

The only other country to have played cricket competitively as a country, as long as England has, is Australia. Both countries’ international statistics start in 1877. I wonder if this statistic in itself tells us about the first international game?

Anyway, before getting sidetracked, let’s get back to the key question: is England’s winning percentage any good?

Between 1877 and 2020, Australia played 830 games and won 393 of them. I wonder if it’s possible just to look at those final two numbers and estimate whether Australia wins more of its games, more often, than England — 393 is just about half of 830. England’s winning percentage is close to one third. I think Australia may hold the crown on this one.

Comparing cricket statistics between England and the West Indies

Fast forward to July 2020, the first international cricket matches since lockdown are between England and the West Indies (whose winning percentage is 31.99%, in case you were wondering).

It’s a three-match series. As I write this, England has won one and the West Indies have also won one. So it’s down to the last game. High excitement, I hear you say. Let’s check to see if that’s true.

The game of cricket can be won, lost or drawn. Most people will want a result so one team can say, “We won the series!”

I want to know how excited I should be that the outcome of the match will be a win or a loss. It turns out I can quantify my excitement using statistics.

What else can statistics uncover in cricket?

Batting in cricket can be a slow process but so far in this series I know this. Statistically there is one standout performer.

England’s Ben Stokes scored 176 runs and took three wickets in the second match of the series, propelling him to the top of the International Cricket Council’s all-rounder list. As a matter of interest, Jason Holder, playing for the West Indies in the same match, is number two.

The problem is, statistics tell me Ben Stokes batted for over eight hours. It was a four day game. Unfortunately, statistics have undone me here. It would be impossible to convince the boss that I could watch Ben Stokes bat during my lunch break.

So what will I settle on in the last match of this series?

Shannon Gabriel. He bowled 24 overs (6 bowls per over) and got four people out. That’s pretty good. On average, an over takes 5 minutes. This means 24 overs will, on average, take 120 minutes. Over four days, that’s 30 minutes per day (the length of my lunch break). Rest assured boss, statistics have won the day here.

Statistics help me make sense of things, they allow me to make predictions, they let me pick the best parts of a game of cricket and they also keep me employed.

When teaching statistics to children, we need to keep in mind that this is all accessible to them too. Statistics can be collected from any interests they may have. Given the chance to use statistics, I wonder what stories they can tell and what conclusions they can share.