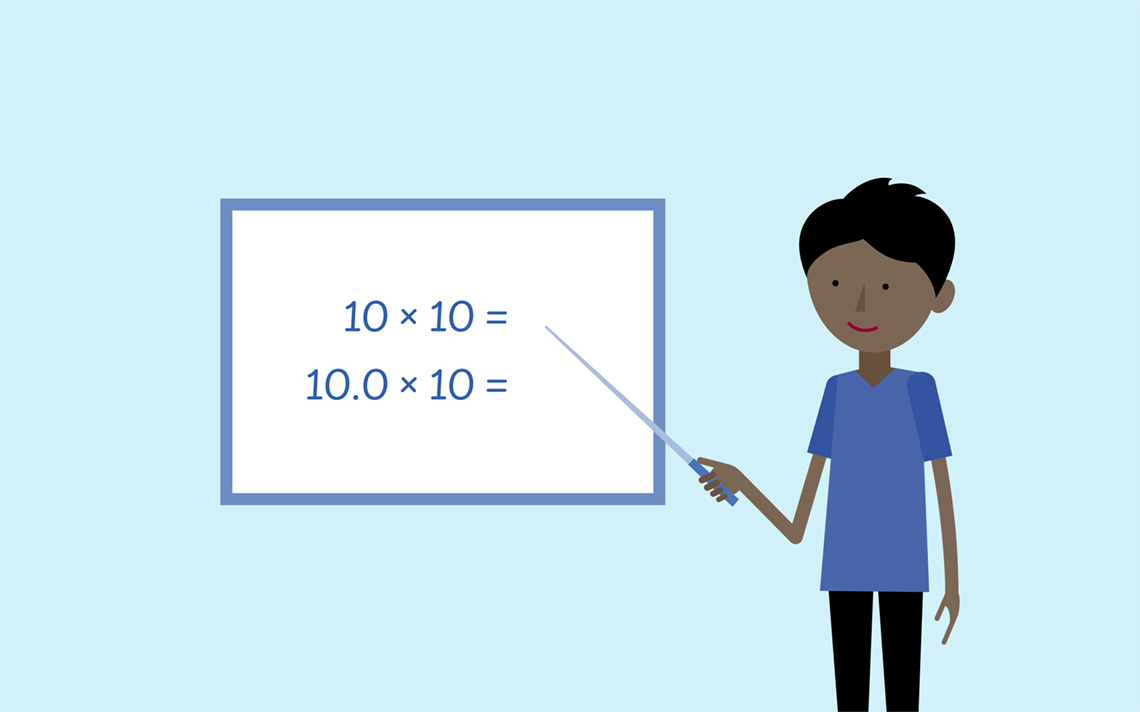 Editor note: This blog post was originally published on 4 September 2019

If you’ve ever said ‘just add a zero’ when teaching how to multiply by 10, your learners could be missing out. Avoid this common maths misconception with our advice.

One all too common maths misconception is adding zeros when multiplying by a power of 10. I know teachers don’t deliberately set out to teach this misconception but many have inherited it from when they were in school; innocently repeating it in their own practice.

Should you just add a zero when multiplying by 10?

Maths learners often hear this misconception: “when multiplying by 10 just add a zero”.

This approach is limited in its usefulness and can be damaging. It’s almost taught like a sort of recipe but ‘adding a zero’ is like cooking the books, it’s maths fraud!

Blindly accepting this method for multiplying by 10 means pupils apply this rule incorrectly because they don’t appreciate the underlying mathematics at work. The ‘adding zeros’ trick can work when multiplying whole numbers by powers of 10, for example, 678 x 10 = 6780, 213 x 100 = 21300, 34 x 1000 = 34000, but this method completely falls down and is totally unsuitable when multiplying a decimal value by a power of 10.

In this example, 9.5 x 10 isn’t 9.50 because simply inserting a zero on the end gives exactly the same value.

Although taught as a helpful rule when multiplying by 10, ‘adding a zero’ is a maths misconception that stops learners from developing a deeper understanding of the base-ten system.

Imagine ‘adding a zero’ when multiplying 0.05 by 10. Pupils who have learned this rule might answer 0.050, or they could decide to add the zero somewhere else because they are unfamiliar with decimals. I’ve seen learners come up with 00.05.

Why ‘adding zero’ is a problem

From the outset, pupils need to grasp the idea that when you multiply by 10, 100, 1000 and so on, each digit shifts to the left on a place value table because they’re adding another place to the number.

They need to remember that the decimal point never moves (it’s another piece of faulty maths advice is to say that it does). Think of the decimal point like a concrete post — it exists to separate whole number places from decimal fraction places. It’s an immovable dot.

Imagine that 0.25 is divided by 100. If we say that ‘you move the decimal point two places to the left’, we have a problem. In this case, there’s only one number to the left and this will confuse some children who can easily forget which direction to move.

Teaching maths shortcuts will come back to bite you further down the line. Discovering that you’ve been doing something wrong all along can upset learners. After all, they’ve only followed what they’ve been taught. This means they have to unlearn, start again, and trust someone else to teach them the correct method.

Pupils trust their teachers and rarely challenge what they’re being taught. So it can come as a surprise to find that they’ve been given wrong information. Finding out a maths teacher was wrong can be hard to take. How will they trust the next teacher to teach them what’s what, and what’s not? Passing maths misconceptions on to the next generation negatively affects maths learning, children’s confidence, and can twist general conceptual understanding out of shape.

Can ‘just add a zero’ ever be useful?

Some might say that shortcuts are only helpful to pupils after they have mastered a maths concept. There is some value in showing a shortcut, but only to expose it as a maths misconception alongside examples where the trick doesn’t work.

If you come across the ‘just add a zero’ rule in your teaching it may take a fair bit of clearing up. On the other hand, it’s a powerful learning opportunity and a chance to set the record straight.

At the end of the day, understanding place value, what multiplication is, and concepts of quantity (such as number sense) have to come first.

So let’s leave the tricks out of the equation and teach for full understanding. If you see or hear the ‘just add a zero’ rule when multiplying by 10, challenge it! Because this is one misconception that can easily grow, solidify, and undermine pupils’ confidence if left unchallenged.

John Dabell is an education consultant and author who specialises in primary maths. He has contributed articles on the topic of pedagogy to the blog.